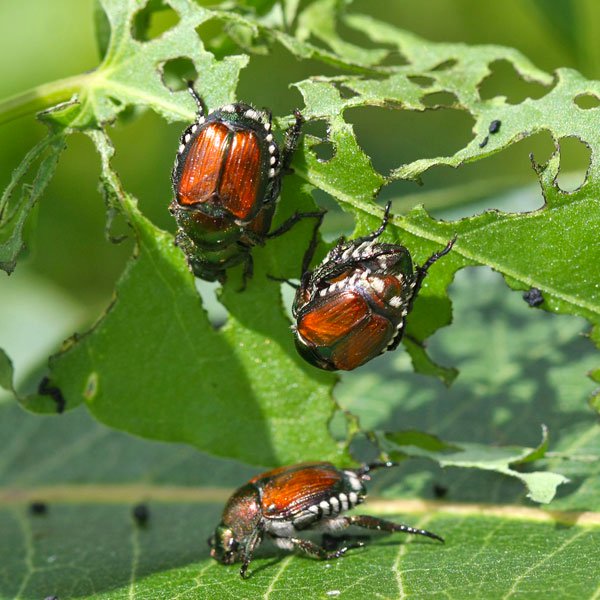 It’s that time again. Japanese beetles are quite active right now in Shelby county and throughout the Mid-South. These severely damaging insects generally show up in our landscapes in mid-June and can be around into August. These pests not only feed on some of our most precious plants, they, because they live in the soil as grubs, pose an even larger problem for those of us who enjoy a well-manicured lawn.

As adults, the Japanese Beetle have a ravenous appetite. They eat almost everything in their path, including one of their favorites, roses. You can easily tell when they have been in your yard by the tell-tale eating pattern they leave behind. Foliage decimated by the Japanese Beetle has a lace-like look with most of the green foliage gone and only the veins remaining. They move in swarms and once they begin to feed, they give off a scent to call the rest of the family to the dinner table. Unlike most beetles, the Japanese Beetles can be found feeding during the day in full sunlight where their almost iridescent copper colored wing covers shine in the sunlight. Fortunately for us, their lifespan is only about 45 days. Egg laying begins soon after the adults emerge from the ground and mate. Females leave the plants in the afternoon and burrow 2 to 3 inches into the soil and lay their eggs, a total of 40 to 60 during their short lifespan. Since these beetles are highly mobile, the only way to protect your plants would be to spray and spray often.

Products like Bonide Eight containing Permethrin, Ferti-Lome Broad Spectrum Insecticide containing Bifenthrin, Hi-Yield Systemic Insect Spray containing Imidacloprid, Bonide Systemic Insect Control containing Acephate, and Captain Jacks Dead Bug Brew containing Spinosad are some of the best products to use to keep the damage to a minimum. Additionally, hanging a Japanese Beetle trap also reduces the beetle population in the area by the hundreds over a short period of time and potentially prevents or minimizes damage to other areas. For further information visit us and we will be happy to assist you in determining the best control for your landscape.

After the female lays her eggs, and a very short gestation period, the eggs hatch into the larva stage or grubs. These grubs begin to feed on the tender root systems of our lawns. There isn’t a favorite, so all Mid-South grasses are susceptible to grub damage. Grub damage appears as an irregular brown spot in the yard that grow at a steady rate. When the life sustaining root system is damaged or gone, the grass dies very quickly. With the number of insects that start out as grubs in our lawn, its no wonder we are seeing a marked increase in lawn damage that can be attributed to grubs. The secondary problem with a high number of grubs in your soil is moles. Grubs are a primary food source for moles and once they find a good place to feed, they can turn your once manicured lawn into what closely resembles a war zone. Once moles have entered the landscape they are difficult to get rid of. They rarely venture above ground so conventional small animal traps and baits are useless. In ground traps and baits are hit and miss and repellants are not 100% effective. Removing the food source prior to the moles venturing into your yard, is the best way to keep them away since their only reason to be there is to feed.

Knowing the life span from hatching to becoming whatever beetle they turn out to be is the key to keeping grubs under control in your lawn. When grubs first hatch, their first instinct is to feed. Treating your lawn with a Systemic Insecticide like Hi-Yield Grub Free Zone II containing Imidacloprid is your best chance to kill off or knock back the grub population to acceptable levels. Grubs will continue to increase in size until fall when the dropping soil temperatures forces them to burrow deeper in the soil to seek warmth. In the spring, when the soil temperatures begin to rise, the grubs come out of their hibernating like state to again feed on the root systems of the grass. About 14 days prior to emerging from the soil as a beetle, the grub goes into a pupae stage and stops feeding. The best product to kill grubs in the fall prior to soil temperatures dropping is Bayer Grub Killer containing Dylox. This product can also be used in the spring when the soil temperatures rise and the grubs come back to the surface to feed. Timing and selecting the correct treatment is critical to controlling damaging grubs in your landscape.